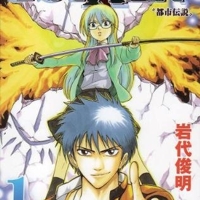 One day while heading home, Ageha Yoshina finds a public pay phone ringing by itself. He picks it up, receiving no answer except a calling card with the word “Psyren” printed on it. After Sakurako Amamiya, a girl in Yoshina’s class, disappears after mentioning “Psyren”, Ageha uses the calling card in hopes of finding her. After answering a long and detailed quiz on a pay phone, he is asked if he wants to go to Psyren. The next day, he answers a ringing phone and is immediately drawn into the world of Psyren, which is a wasteland inhabited by monsters called Taboo. It’s later revealed that the Psyren world is really the future of Japan, and that the taboo were once humans who turned into taboo by an organization known as the W.I.S.E. The voice from the phone, dubbed Nemesis Q, assigns the humans it transported missions which they must complete if they wish to return home. Due to the atmosphere in the world of Psyren, the contenders begin to develop psychic powers. Ageha quickly discovers Psyren to be the future of Japan and sets out to find out the reason.