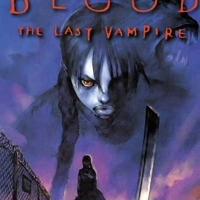 At the Yokota Base in Japan, a nervous American military is on the brink of the Vietnam War. But a greater threat exists within the walls of the heavily-guarded compound: Vampires. A team of top-secret undercover agents learns of these blood-sucking fiends, and dispatches the mysterious Saya to hunt down and destroy them. This beautiful yet dangerous vampire slayer must use her extraordinary abilities and lethal Japanese sword to save the humans from the vampires who fear no sunlight. Based on a concept by Oshii Mamoru (Ghost in the Shell). Directed by Hiroyuki Kitakubo.

Note that the anime has both Japanese and English scenes in the same movie, so it’s not a 100% Japanese or 100% English dub. There is more English than Japanese though. For standardizing purpose the Japanese/English version is marked as English.