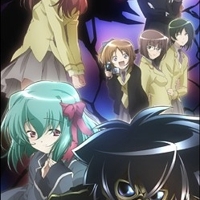 In Japan’s near future, grotesque monsters called “Mushi” appear. They infect people, giving them supernatural powers. “Mushitsuki”, the hosts of the Mushi, are held in fear, loathed, and abandoned by society… or they are killed by the Mushi.

In the midst of this, high school student Kusuriya Daisuke encounters a girl on his way to the school he has just transferred to.

Somehow, he and the girl, Anmoto Shiika, standing there at the railroad crossing, find themselves attracted to each other. As if recognizing that which is missing from within themselves in the other, their relationship deepens rapidly.

However, Shiika is a fugitive from GARDEN, a secret asylum for Mushitsuki. Tokkan, or the Special Environment Preservation Agency, which is responsible for finding Mushitsuki and confining them in the asylum, orders Kakko, their top agent and strongest Mushitsuki, to hunt down Shiika.

There are also people who fight against Tokkan. The resistance, Mushibane, seeks out those Mushitsuki who have been ostracized by society. Their female leader, Lady Bird, orders the resistance members to save Shiika before Tokkan finds her.

The fights between Mushitsuki and Mushitsuki over Shiika disrupts everyday life. In these fights which surpasses one’s imagination, young people lose their lives in vain.

However, the Mushitsuki have a fate that they cannot escape from. The Mushi eventually eats the host’s dreams instead of giving him or her supernatural powers, killing the host.