Acacia commented on stardew valley anyone?
Acacia
Jul 21, 19 at 3:01am

In fact I love that game. I play it all the time with my sister.

I haven't played it in over a year, but at the time, I was pretty serious with it on the ps4.

The trick to "breaking" the game by the 3rd year is to focus on getting the greenhouse and accumulating materials to make as many kegs as possible. Both are a long process. By far the most lucrative thing you can sell is Starfruit wine. When you're able to get Starfruit seeds, you grow them year round in the greenhouse. You also need a shed or barn (whatever you can afford) and fill it with kegs so that you can dump Starfruit in them to make Starfruit wine. Each bottle of wine sells for like $4500.

This was my starter shed... I also had another much larger... thing... completely filled just like this, but I won't show it cuz it's sort of a spoiler for anyone that hasn't completed 3 years in the game 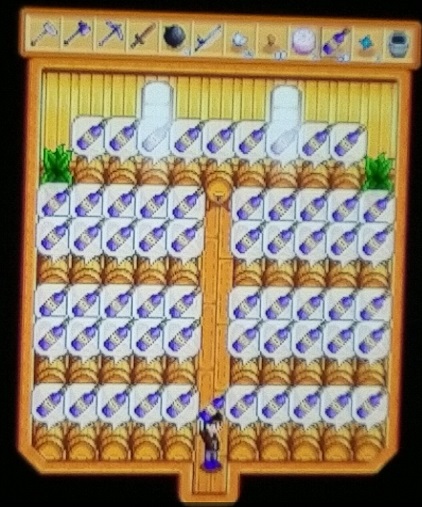 This broke the game for me tho, cuz I was able to buy everything in the game and still have millions of dollars left over. It's why I stopped playing, cuz there was nothing to aim for.