Decided to make this thread in order to stop bombarding the "News" thread with politics.

So use this thread to talk about all things politics. Gripes, complaints, double standards, ways to improve anything

So here is a classic case of Double standard Dems

they alienate their progressive base to pander to republicans, and republicans fucking hate them

theyr brain dead and self destructive 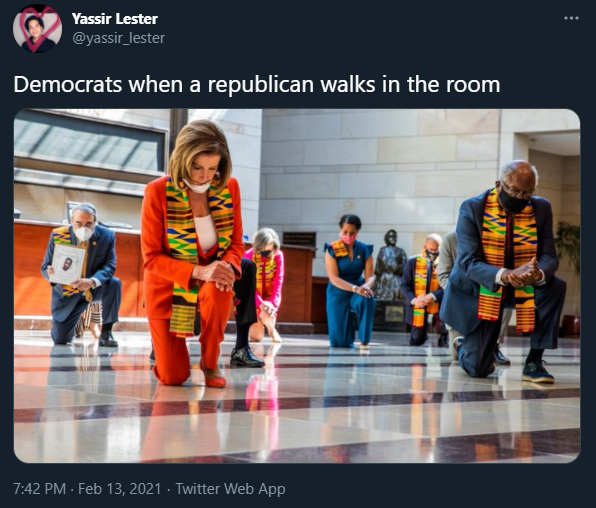 Havent you thought about how volatile our country is rn. The country rn is in divide. Biden has not delivered on any of his promises a month into his campaign and has done more destruction within 3 days to the american people than trump his entire term. If dems dont take Republicans into consideration (cuz you know millions of people actually voted trump) so thats millions of people who dont agree with the Democrats as it is and you alienate them ur just gonna cause more divide. Let them try to take away guns oh man. You thought the BLM riots were bad.

its been divided since the civil war my guy

We arent talking about division between pro and anti slavery. The race problem was already causing divisions since like obama era. You are talking contributing to more division. Anti-gun laws? Not gonna fly. When illegal immigrants flood through the border? Who is gonna answer for all that? This administration is simply adding to the division. Keep in mind BLM praised Biden as a savior then revoked the statement when he ignored them.

Definitely alot of buyers remorse going on and we are only a month in. We will see if it holds up in midterms and both houses dont get swept with a red wave

its more nuanced than pro and anti slavery now

even back then it was 'states rights vs federal rights', that's the core of it

back then it was states rights to own slaves, and now its shit like welfare, abortion, gun laws, universal healthcare, etc

but at the core its still federal vs states rights

now dems and repubs switched bases during, what, the 50? 40? but repubs have always been pro big business

WHICH back then wasn't a bad thing, because we want big businesses back then so we have more jobs, so og reoublicans i would support

republicans were the party of the past

cause guess whos paying for those tax cuts for the wealthy? the poor and our national debt

they subsidize it through that

RAISE TAXES FOR THEM, because that's how you subsidzie lowering taxes for the rich, that money has to come from somewhere

anyways, be thankful biden will be dismantling many aspects of trumps tax policy, raising taxes for people making 400k (as they should be....)

Republicans party of the past, dems so for the people. Simultaneously putting 10,000 people out of work. Saying its to better the planet while flying in jets that emit enough carbon that it doesnt make a difference. People 15+ years work experience told to start over in a different field. Only to then be proven how stupid they are with situations like texas. Yes there was more to texas than clean energy and fossil fuels but still it played a part in that talk.

If anything Dems are pro big wigs. Because none of their policies i have seen so far benefiting anyone. American anyway.