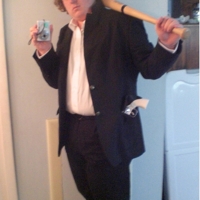 28 year old Male
Single
Likes: Females
Last online about 12 years ago
OH
Activity
About
Pictures
About Me. . . Umm well im obviosly an otaku, I love anime, manga, and cosplaying. So far I've been to 4 cons now and I have had a good time at all of them. My real name is Clay BTW. But as for me, im now a sophmore. I love listening to music, I listen to anything but rap, R&B, country, and thats all at the point of my mind. . . Im also addicted to Vocaloid, their epic!. Useually any movie i see i like, their mainly horror, comedy, or sci-fi. As far as like DVD movies some of my favorites are RENT, Lion King, any Hayao Miyazaki movie, and any anime movie that i've seen the series for. I like most video games execpt for any sport games . . . Execpt for skateboarding games, those are entertaining (only when you crash and burn . . . and also ATV Off Road Fury :) So really theres a lot I like, but theres a lot of things i dont like. Those are mainly little kids, yappy dogs, meeting parents, (naturally, guys think that the parents will hate them) and any gangsters/rappers/threat to society. Another thing about me is that i am Catholic, however im not a full dedicated Catholic. The last time i went to church was about last year. Also i am not afraid to curse, naturally i dont unless i hear the other person do it. I do believe that chivalry is NOT dead, I still hold doors and treat women with as much respect as i would any other person. Im always looking for more otaku friends around Columbus. Another thing is i really dont like long distanced relationships, so i'd at least want to see you once every few weeks or so, but talking or txting is something im more then willing to do. . . Oh my god I just realized this is probably the most I ever typed for one subject. I think its worth it though. I really cant think of anything else to talk about, so if you have any more questions about me feel free to message me and i'll answer then as soon as i can. Here are some LIKES and DISLIKES.

DISLIKES: Little kids who are not controlled by the parents, dogs that keep barking . . . constantly, people who think cosplayers are bad, people who think they know a lot about somethig but dont know it at all, lies, long distant relationships, people who judge your cosplay badly, bees, preps, people who dont know when to not care, constantly depressed people, jocks, jerks, bullies, people who believe a little to much in their religion (i have stories if your interested to hear), people who are racist, people who cant tell the difference between being racist or jokeing, people who talk about suicide, and many, many, MANY, more.
8 Friends 22 Anime 2 Cons
Favorite Anime