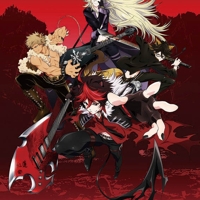 Set after the events of the first season, the intergalactic fleet led by the malevolent Queen of Darkness Victorious unleashed a devastating attack on Sound Planet in the future, causing total destruction on Midi City. Upon its destruction, a mysterious band named Bud Virgin Logic appeared and performed a malevolent tune to the surviving denizens while Dagger Morse corrupts all the citizens, draining of their sound energy and plunging the city into chaos and despair. From the attack, Ninjinriot only survived and feared the utmost worst scenario that would lead to the fall of the Sound Universe. With no choice, the band traveled back in time to prevent it from happening. At present day Midi City, Maple told the members of Plasmagica, Shingan Crimson and Cristicrista that their recording label is holding a beneficiary concert to the people with somewhat positive reactions. Though at the time of the concert, Plasmagica, despite not having Cyan is eager to perform until Bud Virgin Logic appeared alongside Dagger Morse, who announced he will destroy the ones who defeated them. But they were thwarted by Ninjinriot completely and rescued the trio. After Dagger and his band retreated, Arashi told them that bad things will happen if they don’t stop Dagger and Bud Virgin Logic, resulting to the said bad future and got everyone worried that they will be a new battle. At the same time in the Human World, Cyan Hijirikawa was stuck in an writer’s block regarding composing a song to her band in the upcoming school festival. Kamui arrived at the Human World and transported Cyan back to the Sound World in order to prevent the dark future from happening. With the entire world in a knife’s edge, it’s up to Cyan and her friends once again to stop Dagger and Victorious from destroying the Sound Universe.