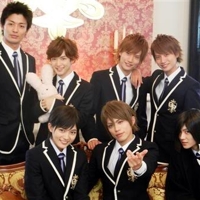 Following the events of the TV series, Haruhi Fujioka, a brilliant student from a middle-class family, continues to attend the prestigious Ouran High School and work in its Host Club, composed of six handsome boys: the hyperactive Tamaki Suou, sneaky Kyoya Ootori, playful twins Hikaru and Kaoru Hitachiin, cutesy Mitsukuni “Honey” Haninozuka, and quiet Takashi “Mori” Morinozuka, who service its female customers through flirting, which she agrees to do to pay for accidentally breaking the club’s priceless Ming vase. Having spent her first year in the club, Haruhi becomes accustomed to the boys and is especially flustered when she comes face to face with Tamaki; she later learns from a romance magazine given to her by the creepy occultist Umehito Nekozawa that she has in fact fallen in love with him. This does not bode well with Hikaru, who has feelings for Haruhi.In the meantime, the Host Club is about to attend the annual Ouran Festival, whose winning reward is the right to use the luxurious Central Salon. The club has to compete against, among others, the Black Magic Club (led by Nekozawa) and the American Football Club, led by Kyoya’s rival, Takeshi Kuze. At the same time, the school also welcomes Princess Michelle Monaru of Singapore as an honorary student. The spoiled Michelle wants everyone to cherish her and later appears to make moves toward Tamaki, which makes Haruhi jealous.