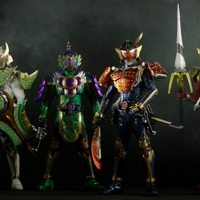 Because of the large company, Yggdrasill Corporation setting up shop in a once bustling city of Zawame (? Zawame-shi?); the community started to become more like a j?kamachi (? castle town?). To escape the feeling of being under castle authority, dance crews were formed by young people to bring joy back to the public. Along with this is a popular game that uses the mysterious Lockseeds that contain animals called Inves that are said to come from another dimension. As the game becomes more popular, tears in reality begin to open that bring the Invase from their home dimension to Earth. Kota Kazuraba, a young man who recently quit his dance crew, Team Gaim to help his sister Akira Kazuraba finds a special Lockseed and the Sengoku Driver to become Kamen Rider Gaim to fight the sudden appearance of the Invase, but also against other Kamen Riders, effectively becoming a Kamen Rider warring states period.