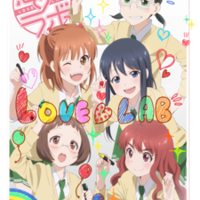 The Fujisaki Girls Academy is known for their school body being composed of very proper students. The most prominent one of them is Maki, the student president who is admired by her classmates for her calm and polite demeanor. On the other hand, Kurahashi Riko is also admired but for having a very forward and boyish personality. Riko accidentally walks into Maki while she’s practicing kissing with a pillow and learns that she isn’t what everyone thinks she is. Riko is forced into keeping Maki’s secret and join her in practicing all aspects of romance like holding hands and more.