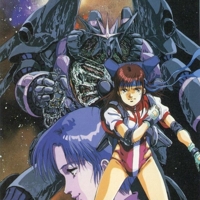 2015: Earth’s first faster-than-light ship, the Luxion, is lost, attacked by unidentified space monsters in the Perseus Arm. Six years later, Noriko Takaya, daughter of the Luxion’s commander, enters the Okinawa Girls’ Space Pilot High School, vowing to be a pilot and follow her father’s trail to the stars. But is she prepared for the intense training to become a member of the elite Top Squadron? Noriko’s fight has just begun and the fate of all humanity depends on her meeting the challenge!