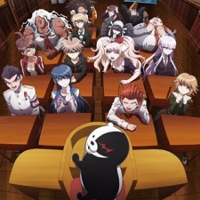 The game is set at a special, elite high school called Kibagamine Academy (lit. Hope’s Peak Academy) which only accepts students of the highest caliber in various fields. To this effect, each student has a title in akin to “Super High School Level”. However every year it accepts one average high school student chosen by raffle and given the title of “Super High School Level Good-Luck”. The events of the game are shown through the eyes of the protagonist Makoto Naegi, one such average student.

It is revealed that they are trapped inside the school for life by a sadistic, remote controlled, black and white bear called Monokuma. The only way to escape is by “graduating.” In order to graduate, a student needs to commit a murder without any of the other students figuring it out. If the culprit succeeds at committing the perfect murder, then the rest of the students are sentenced to death while the culprit gets to leave the school.

A school trial is held when a murder occurs, so students can share information and debate about who is the culprit that committed the murder. They decide on who is the culprit by taking a vote. If the students pick the right suspect as the culprit, the culprit is put to a gruesome execution relating to their SHSL talent for disrupting the order of the school.

Amazon
Anime Rating
8.7/10
704 users added this.
Similar in these categories.