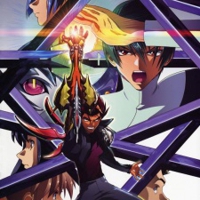 Set several years after “The Great Uprising”, a future geological phenomenon in the Kanagawa Prefecture near Tokyo, people have developed a power granting them the ability to deconstruct, reshape, and crystallize matter at a molecular level using only thought and willpower. These people have come to be known as “Alter” users. With only 1% of the newborn generations receiving such special power, though this number rises steadily as the series progresses, some feel a superiority over normal humans.
There are two opposing forces of alters: the Native Alters, a group of Alter users who live outside the central city and avoid any relationships with the government; and HOLY, an organization of Alter users that are a subgroup of an organization called HOLD. HOLD functions as the Mainland government’s super police force of the Lost Ground, while HOLY, composed exclusively of Alter users, serves as the “special operations” group, aiding HOLD in performing dangerous missions that might require the help of an Alter user.
Kazuma (dubbed “The Treasoner” in the manga and “The Shell Bullet” in the anime) and Ryuhou are the two s-CRY-ed characters bearing a rivalry used to drive and focus the plot. They spend much of the series trying to defeat each other, even when they are forced to work together. Neither can forget their bitter rivalry.
There is also a narrator, Kanami. Kanami is a close friend of Kazuma, who protects her and treats her like a little sister. She narrates the series with her dreams, unknowingly using her alter power to “scry” the emotions of the people she feels closely about. Her ability to peer into the emotions of the main characters is used frequently throughout the series to bring insight to the characters, and to tease viewers during previews for the next episode.