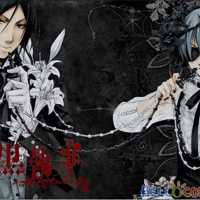 A small boy named Ciel at a younge age lost both his parents do to a terridle fire but it was no accident it was murder and he almost died with them but a tall, slim, handsome demond of the name Sabastian saved him in the middle of his death but they had to make a deal if he allowed that small boy to live one day the demond Sabastian is going to swallow his sole and in return until that day comes he will serve abd pretect him but just to make sure Sadastain took his right eye just in case who know what lies ahead of them to find out watch the show!