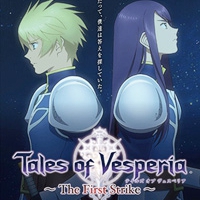 A long time has passed since the end of a massive war between humans and monsters. A new type of energy named “aer” was discovered. When crystallized, this substance became the energy source for “blastia”, an ancient civilization’s technology that provided a wide array of essential abilities for humanity. Despite it’s manipulation, mankind still has little knowledge of what exactly is “aer”. On a mission to eradicate a horde of monsters near the town of Shizotania, a group of knights comes across a strange surge of “aer”. Yuri Lowell and Flynn Scifo are two new members fresh out of the academy of this knight division. Both are childhood friends who went separate ways, but ended up meeting each other once again while enlisting to serve the Empire.