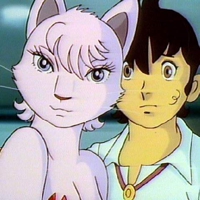 Deep in the South American jungle, a Japanese hunter named Ryosuke Ishigami(Ryo for short) and a local boy named Chico stalk a creature that has been terrorizing the local countryside. Ryo, however, is quite familiar with this beast, and while they wait at a desert cave where Chico had previous spotted her, he tells Chico about her.


On his fifteenth birthday Ryo, the delinquent son of a crime reporter and a geneticist, is out with a motorcycle gang when they encounter a mysterious woman. Some of the rougher members of the gang accost her, and she turns out to be anything but normal, retaliating with seemingly supernatural agility but spares Ryo. The gang leader returns to the woman’s hideout for revenge, but the gang members are torn apart, but she again spares him and reveals herself to him.


The woman is not really human at all, but a catgirl named Bagi — and it was Ryo himself who had raised her as a kitten after his father found her near his mothers lab and brought her home as a pet. As Bagi grew and people became suspicious of the precocious “cat”, who was able to walk on her hind legs and even learned to write her own name and speak. Not wanting to cause trouble for him she escaped and grew to adulthood on her own.


Upon their reunion, Ryo and Bagi join forces to find out the truth of her origins. With Bagi’s superior strength and agility they manage to break into the lab where his mother worked and confront its president in his office. He reveals that Bagi is a product of recombinant DNA research be human and mountain lion cells and that Ryosue’s own mother was responsible for her creation. Nine years ago an earthquake damaged the cells holding experimental animals, allowing them to escape. Among them was Bagi’s mother, who hid her kitten before being killed under orders from Ryosuke’s mother, in other to contain their research leaving the catgirl the only survivor. Bagi reveal strange powers of hypnosis, forcing the president to