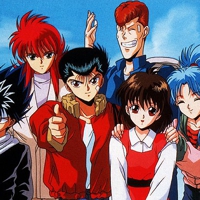 YuYu Hakusho follows Yusuke Urameshi, a street-brawling delinquent who, in an uncharacteristic act of altruism, is hit by a car and killed in an attempt to save a young boy by pushing him out of the way. His ghost is greeted by Botan, a woman who introduces herself as the pilot of the River Styx, who ferries souls to the “Underworld” where they may be judged for the afterlife. Botan informs Yusuke that his act had caught even the Underworld by surprise and that there was not yet a place made for him in either heaven or hell. Thus Koenma, son of the Underworld’s ruler King Enma, offers Yusuke a chance to return to his body through a series of tests. Yusuke succeeds with the help of his friends Keiko Yukimura and Kazuma Kuwabara. After returning to life, Koenma grants Yusuke the title of “Underworld Detective”, charging him with investigating supernatural activity within the human world. Soon Yusuke is off on his first case, retrieving three treasures stolen from the Underworld by a gang of demons: Hiei, Kurama and Goki. Yusuke collects the three treasures with the aid of his new technique, the “Rei Gun”, a shot of aura energy fired mentally from his index finger. He then travels to the mountains in search of the aged, female martial artist master Genkai. Together with his rival Kuwabara, Yusuke fights through a tournament organized by Genkai to find her successor. Yusuke uses the competition as a cover to search for Rando, a demon who steals the techniques of martial arts masters and kills them. Yusuke defeats Rando in the final round of the tournament and trains with Genkai for several months, gaining more mastery over his aura. Yusuke is then sent to Maze Castle in the Underworld where Kuwabara and the newly reformed Kurama and Hiei assist him in defeating the Four Beasts, a quartet of demons attempting to blackmail Koenma into removing the barrier keeping them out of the human world. Yusuke’s next case sends him on a rescue mission, where he meets Toguro, a human t