The Legend of Zelda [OVA] 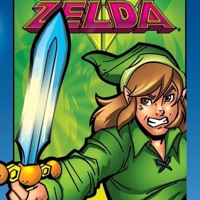 Originally seen as a component of the Nintendo-inspired cartoon series Super Mario Brothers Super Show, The Legend of Zelda is the 13-episode saga of a feisty 15-year-old Princess, a bold adventurer of the same age named Link, and all-around sidekick Spryte. The “good guys” (actually two guys and one gal) are dedicated to keeping the Triforce of Wisdom out of the clutches of the evil Ganon and his Moblin flunkeys. In the opening episode “The Ringer”, Ganon creates a monster to capture Zelda, thereby distracting Linky and Spryte from safeguarding the Triforce. In “Cold Spells”, poor Sprite falls under Ganon’s control. “The White Knight” shows that Zelda should know better to fall in love with anyone named Prince Façade. A kiss from a beautiful maiden has the reverse effect than the one expected, transforming Link into a frog, in “Kiss ‘N’ Tell.” “Sing for the Unicorn” finds Link and Zelda uniting with a sylphlike girl, whose unicorn was stolen by Ganon, to rescue Zelda’s dad the King. In “That Stinking Feeling”, an unscheduled trip to the Underworld spoils a special moment for Link and Zelda. Then in “Doppelganger”, Gannon summons the “Evil Zelda” and her own Moblins from an magic mirror. Link and Zelda are forced into a perilous trek through Ganon’s domain in “Underworld Connections.” An elaborate con job is called for when Ganon tries to get his mitts on Link’s enchanted sword in “Stinging a Stinger” A black-magic necklace and a hard-working castle handyman figure into “Hitch in the Works”. In “Fairies in the Spring”, Link and Zelda call upon the Triforce to allow them to breathe underwater when the King is kidnapped (again!). Link’s body is separated from his spirit, courtesy of Ganon’s Evil Jar, in “The Missing Link” Finally, “The Moblins are Revolting”—and that’s putting it mildly—when Ganon is toppled from power…or is he?