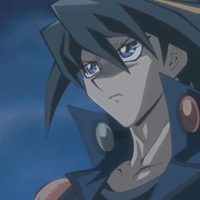 The game of Duel Monsters has changed; a new addition has been introduced to the future of dueling as seen in 5D’s: “Turbo Duels”. These duels are played in giant stadiums, and duelists ride motorcycles with built-in duel equipment known as “Duel Runners” (“D-Wheels” in the original Japanese version). Domino City has also changed, under the guidance of the head of its Public Security Maintenance Bureau, Rex Goodwin. Rich and powerful people live in what is now known as New Domino City (“Neo Domino City” in the Japanese version), while the poorer class are shunned and live mostly in the slums area, known as “The Satellite”. They are referred to as “Satellite slime,” by the inhabitants of New Domino City. An aspiring duelist from Satellite, Yusei Fudo, builds his own Duel Runner, but is betrayed by his best friend, Jack Atlas, who steals his Duel Runner and his most precious monster, the Stardust Dragon. He does this by tying his and Yusei’s friend Rally on a raft and making Yusei choose between stopping him or saving Rally from drowning.