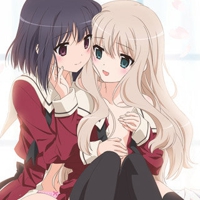 Sono Hanabira ni Kuchizuke wo began as a simple yuri visual novel that features a really light yuri story. It emphasized the soft romance between two girls and quickly became one of a kind in a world dominated by fetishist and heavy materials. It was also one of the first ecchi visual novel that features purely yuri relationships. Because of its uniqueness, it soon gained widespread popularity not only within the niche, but among many anime fans.

Following the success of the first game, Sono Hanabira quickly expanded into a series of games that all cater to the sweet fluffy side in us. Since its humble beginning, the visual novel series has also prompted several associated artworks, light novels, drama CDs, an artbook, and even an anime adaptation.

Impeccably complemented by Peko’s gorgeous artwork, Sono Hanabira is as asthetically pleasing as it is adorable.