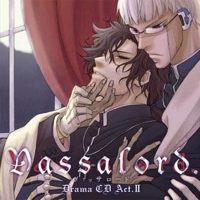 Vampires Charles J. Chrishunds (Charley) and Johnny Rayflo have a strange relationship. Charley is a cyborg, and a vampire hunter for the Vatican, while his master Johnny enjoys a playboy lifestyle. While fighting crimes involving vampires, Charley struggles to control his lust for blood and for Johnny, while Johnny (previously known as Addie before becoming a vampire) delights in seducing his servant and attempts to deal with issues from his own past. Johnny cares about Charley (also known as Cherry and Chris), and the feelings don’t seem to be one-sided.