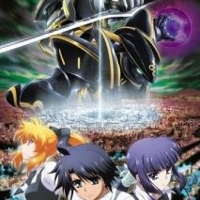 This is the direct sequel to Asura Cryin’. Natsume Tomoharu appears to be an ordinary high school student who lives alone. What distinguishes him from others is that his childhood friend, Minakami Misao, is a ghost. On the day that he moved into his new residence, he was given a silver-colored case, sent to him by his elder brother. That night, he is attacked by a mysterious girl in shrine maiden garb. After many dangerous incidents, Tomoharu’s understanding of the hidden truth concerning his case as well as the world. Now, his story continues.