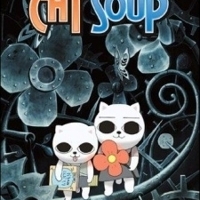 Cat Soup is an extremely difficult film to describe, due to its awesome surrealism and almost nonexistant dialogue. It is more a work of art than an anime. There are many underlying themes, such as the transcience of man’s existence, but it can be enjoyed without understanding any of them. The plot, though simple, isn’t necessarily understandable without being explained. The main character, a cat named Nyatto, embarks upon a journey to save his sister’s soul, which was ripped in two when Nyatto tried to save her from Death. She trails after him, brain-dead. They encounter many brilliant, mind-bending situations, beginning with a disturbing magic show.
[Source: ANN]