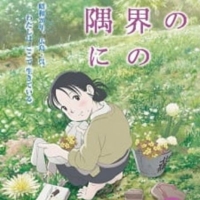 In This Corner of the World (この世界の片隅に, Kono Sekai no Katasumi ni) is a 2016 Japanese animated wartime drama film that takes place in the 1930s–1940s in Hiroshima and Kure in Japan, roughly 10 years before and after the atomic bomb, but mainly in 1944–45. In the film, nature and traditional culture in Japan are clearly described and contrasted with the cruel and irredeemable scenes brought by the war. Though it is a fictional account, the official guidebook of the film claims that the episodes and background of the story are based on facts and real incidents of the lost townscape of pre-war Hiroshima, damaged by the atomic bombing in Hiroshima, researched by the production staff.