Jem and the Holograms [TV] 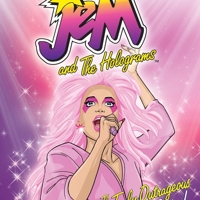 Teenage songwriter Jerrica Benton and her younger sister Kimber live with their Aunt Bailey and two foster sisters, Aja and Shana. The four girls frequently videotape themselves playing music and wearing colorful 80’s outfits just for fun, but Jerrica is too shy to sing on camera. Jerrica learns one day that due to Aunt Bailey’s financial problems their house will be auctioned. She vents her emotions by recording a song with the video camera Kimber uses to post blogs. She disguises herself by calling herself Jem, her deceased father’s nickname for her.

She forgets to delete the video, and an Internet-obsessed Kimber posts it onto YouTube. The video attracts millions of views in a single day. Jerrica is offered a record deal by Starlight Productions and travels to LA with her sisters. They meet music producer Erica Raymond and her son Rio. Erica is polite and courteous with the four girls but shows particular interest in Jerrica, who she sees as a potential superstar.