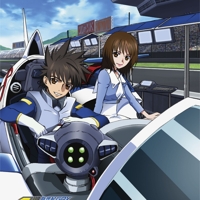 In the future, special AI computers called “Cyber Systems” have been used in racing to help racers improve their abilities and reduce accidents. One of them is a machine called “Asurada”, a super-intelligent AI computer developed by Sugo Corporation, which is being targeted by Smith, who wants to use it as a military weapon. As the system is built for racing, Sugo puts Asurada into a car called GSX and delivers it to the Cyber Formula GPX’s qualifying round in Fujioka, however, during the delivery, the machine is attacked. The story focuses on a young 14-year-old boy named Hayato Kazami, the son of the designer of the car, who activates Asurada GSX in order to escape from Smith’s men. But because of the machine has locked Hayato’s driver data, he has no choice but to become a racer for the Sugo Team. In the first qualifier, he races heatly with Naoki Shinjyo from Aoi and ends up in third place. In the second qualifying round, Hayato meets Johji Ohtomo, a racer from Albatross DDT and become good friends. During Hayato’s training at night, he is attacked by Smith’s men. In the race, Asurada’s tire blows up, Hayato barely completes the race in third place.