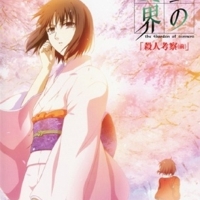 Mikiya Kokutou meets a girl who has a mysterious gaze, and falls in love with her. That April, at his high school entrance ceremony, Mikiya is reunited with the girl. The girl’s name is Shiki Ryougi. Shiki keeps others at a distance, but as Mikiya interacts with her, she gradually opens up to him, though not without trepidation. Meanwhile, the city has been rattled by a series of bizarre murders. There are no known links between victims, and the motive is unclear. One day, Mikiya meets “SHIKI,” another personality that resides within Shiki. Mikiya suspects who the murderer is, but at the same time, he decides to believe in Shiki. An astonishing secret awaits him, but he doesn’t find out until three years later…