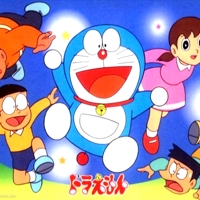 Doraemon is a Japanese manga series created by Fujiko Fujio, which later became an anime series and an Asian franchise. The series is about a robotic cat named Doraemon, who travels back in time from the 22nd century to aid a pre-teen boy called Nobita Nobi that experienced nothing but misery and misfortune manifested in the form of poor grades and bullying throughout his life.
Doraemon has a a pocket from which he produces gadgets, medicines, and tools from the future.Unfortunately, when he has the gadget, Nobita usually gets into deeper trouble than before, despite Doraemon’s best intentions and warnings. Sometimes Nobita’s friends (usually Suneo or Gian) steal Doraemon’s gadgets and end up misusing them. By the end of the story, the characters who do wrong are usually punished.

Hmmm... I prefer Gian's name in Filipino. Damulag is more appealing than Gian and Giant.