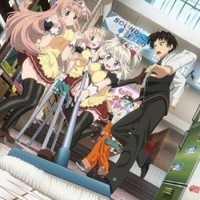 Aspiring to become Heroes, Raul and his band of heroes-to-be were dropped from the Hero program after the sudden and unexpected defeat of the Demon Lord. With his skills now useless in the new world-at-peace, Raul reluctantly becomes a part-timer at a small magic-appliance store and submits to a regular and unfulfilling routine. In the midst of his internal conflict, a rambunctious stranger with strange if not terrible customer etiquette becomes a new employee and is placed under his supervision. Wait, did his résumé say he’s a demon? Wait, he’s a she and she claims to be the Demon Lord’s Daughter?! Things just became a lot more complicated for Raul.