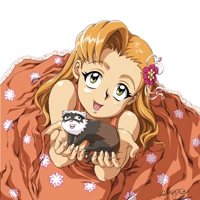 The series begins when Amanda desires a unique pet and chooses a young ferret at the local pet shop. Her mother reluctantly yields to her decision on the condition that it should never injure her. Amanda names it Peach after seeing a fruit stand with peaches. Terrified of losing her new pet and companion, Amanda keeps Peach’s biting a secret. Peach, in turn, rebels in a self-congratulatory way, maintaining that she is a ferret princess who must heroically retain her composure and courage while being tormented by five-headed giants and their slaves. After being forced to fight Mr. Fuzzy — a toy given to Peach which she views as a servant, Peach bites Amanda and Amanda, in response, tries the “Bitter Bite” spray to discipline her. Amanda’s actions reminds her of her mother and Peach softens her view of Amanda.

Amanda brings Peach to her class’s show and tell and because of Peach’s popularity with the class, Amanda’s friend Kim decides to get a ferret. Her ferret, Pavaratty, displays arrogance towards Peach and doubts her princess status since she lacks a palace, an entourage and treasure. Peach resolves to gain these things so she can impress the ferret prince. Meanwhile, two bullies turn Amanda’s class against her after she wears a handmade ferret costume to school in an attempt to stand out. To collect more treasure, Peach secretly accompanies Amanda to school. Kim realizes Amanda’s friendship is more important and admits she was wrong to turn against her. Peach accidentally saves the class’s hamsters from being eaten by a snake which escaped during the show and tell. Amanda is redeemed in the class’s eyes.

To ease Peach’s boredom, Amanda gets another ferret, who is named Edwin after the hero of a romance novel. Initially Peach believes he is her ferret prince, but quickly becomes annoyed by him. Amanda brings the ferrets to her friend’s house. There, Peach and Edwin meet Mimi’s albino ferrets, the manic-depressive Spore and melancholy Truffle, who believe that