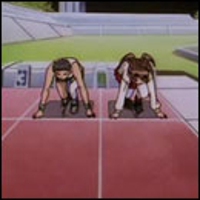 After a thousand years of expansion, humans became involved in an alien war that would be decided by a contest of physical strength. Though the alien race was physically superior to humans, mankind prevailed, ushering humans into a new era of physical fitness and competitions. In the present, Akari Kanzaki has entered the training facility University Satellite in hopes of becoming the latest Cosmic Beauty, a title reserved for only the most physically fit. Join Akari as she faces fierce rivals and tough competitions in an effort to become the best of all the Battle Athletes!