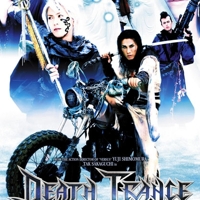 In an unknown place and unknown time, a lone Samurai known only as Grave thirsts for the ultimate battle. Grave has stolen a mysterious coffin from the holy Tougan Temple — a coffin said to contain a great power. Trapped inside the sealed coffin is the Goddess of Destruction, confined and held at bay from laying waste to this world. Grave fearlessly travels the land dragging the coffin behind him, aware that what lies within is what he seeks — if only he can open it. Unknown to Grave, a young temple monk has embarked on a quest to return this relic to its proper home before anyone can unleash an unstoppable cataclysm. So begins the race to claim the coffin…but who will get there first?