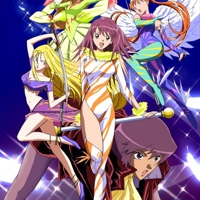 Sora Naegino, a young Japanese girl with a great talent for acrobatics, comes to the United States in hopes of auditioning for the Kaleido Stage, a world famous circus which has mesmerized her since childhood. However, she runs into difficulties as soon as she arrives. She gets lost on her way to the Stage, is leered at by a mysterious stranger, and has her bag stolen by a nimble thief. Employing her acrobatic skills, Sora chases down the criminal.

A kind police officer gives her a ride to Kaleido Stage, but she discovers that she has missed her audition. Her idol, lead performer Layla Hamilton, advises her to return to Japan but a performer’s unexpected injury provides Sora with a window of opportunity. She’s given the rare chance to perform by the Stage’s owner, Kalos (who turns out to be a mysterious man who had eyed her legs earlier). After a faltering effort, Sora is dismissed from Kaleido Stage and prepares to return to Japan, but then Kalos reconsiders, and lets Layla know that someday Sora’s performance will be the main draw at the circus.

Sora spends the beginning of the season as an outcast, as the other performers believe that she had relations with the director to gain her position. Layla, in particular, disapproves of Sora. With the help of her friends (stage manager Ken Robbins, the performers Mia Guillem and Anna Heart, and young Marion Begnini) as well as a lot of hard work and determination, Sora begins to earn the respect of those around her. Her personality causes her to gain the trust of the performers as well as several increasingly major roles in the productions. She also befriends Layla over time.

However, Layla’s father pressures her to leave and insiders plan to take over and shut down Kaleido Stage. Sora relies on her winning personality, hard work and close friendships to keep the stage afloat.