Fushigi no Kuni no Alice 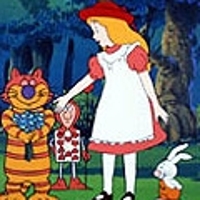 Based on the famous children’s novel by Lewis Carroll, Alice’s Adventures in Wonderland is a rich and wonderful journey into a land of the imagination. One day on a trip to London with her mother, seven-year-old Alice finds an old top-hat in a second-hand shop that is the start of her fantastic adventures.

Out of the top-hat bounds Benny Bunny, who introduces Alice to his uncle, the White Rabbit, royal herald to the Court of the Queen of Hearts. Tailing the White Rabbit across her garden, Alice finds a strange rabbit-hole into which the White Rabbit has seemingly disappeared.

With little hesitation, she jumps in after him, and finds herself falling through the tunnel that leads to the magical world of Wonderland. There, she finds unusual and illogical things, including talking flowers, a story-telling mouse, growth-inducing tea and cake, a Humpty-Dumpty in a perilous situation, a mad March Hare, a wise blue caterpillar, and a bossy Queen of Hearts. Nothing but bizarre and unpredictable things happen in Wonderland and Alice finds herself learning to handle the strange and magical events that are the everyday in this world.