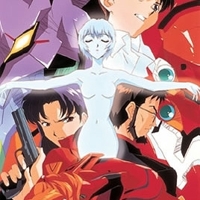 Originally a collection of clips from the Neon Genesis Evangelion TV series, Death was created as a precursor to the re-worked ending of the series. Rebirth was intended as that reworked ending but after production overruns became only the first half of the first episode of The End of Evangelion, with some minor differences. Over time, two newer director’s cuts of Death were produced, each including new footage not seen in the series – these were called Death (True) and finally Death (True)^2. Note that despite containing clips from the series, Death (True)^2 & Rebirth should be seen after the series itself to be fully understood.