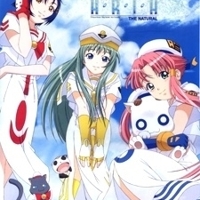 Set in the 24th century, mankind has successfully terraformed Mars, making it a habitable planet and renaming it to planet Aqua. Now living in a planet mostly made up of water and ocean, humans use unmotorized gondolas to travel around their cities.

The story follows Akari Mizunashi, a young woman who just arrived at Aqua from Manhome (formerly known as Earth). Her dream is to become an Undine – a gondolier that acts as a tour guide. Starting her journey in Neo-Venezia, a city that closely resembles Manhome’s city, Venice.

Aria the Natural is the second season of the sci-fi drama anime series Aria the Animation. Produced by studio Hal Film Maker, the series aired a total of 26 episodes between April 2, 2006 and September 26, 2006.

Episode 1: That Encounter at the Carnival…
Ai visits Akira at Aqua for the Neo-Venezia’s Carnivale. There, they meet the enigmatic master of ceremonies, Casanova. Later, Casanova reveals himself as the legendary king of Aqua’s cats, Cait Sith.

Episode 2: Looking for that Treasure…
During practice, Akira, Aika, and Alice finds a box that sends them into a treasure hunt through Aqua’s streets. After gaining the final clue, they later learn that they were not the first ones to find the treasure.

Episode 3: The Night of the Meteor Shower…
Akira, Aika, and Alice plans on watching the meteor shower that will occur the next night. Together with Al, the gondoliers end up at the rooftop of Himeya Company, with an unobstructed view of the night sky.

Episode 4: That Neo-Venezia-Colored Heart…
Akari is temporarily hired by Mr. Mailman while his gondola is still under repair. During their rounds of mail delivery, Mr. Mailman explains to Akari why the people of Aqua prefer hand written mails instead of e-mails.

Episode 5: The Wonder of that